I am so excited – you have no idea!  It’s finally time to start the garden! 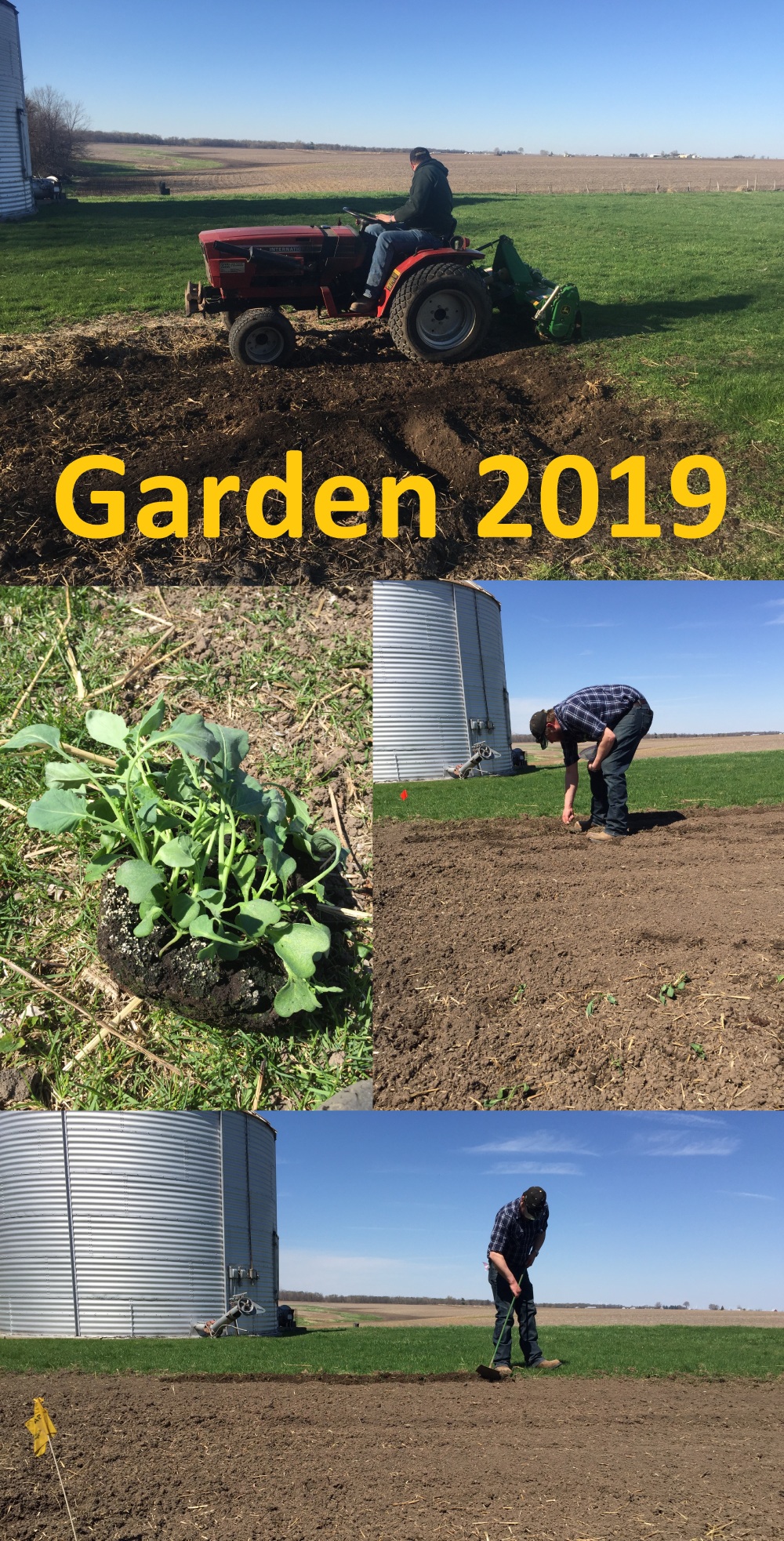 We are a participant in the Amazon Services LLC Associates Program, an affiliate advertising program designed to provide a means for us to earn fees by linking to Amazon.com and affiliated sites.  (AKA – we earn a small commission if you purchase through the link at no extra cost to you)

Colton up and decided to borrow his dad’s little tractor and cultivator – which meant we were tilling up the garden for planting!  (Shh – don’t tell him I took photos of him!)  THIS ONE is similar, but not quite the same.

I tell ya … if I had to do all this by hand I would give up!  That little tiller thing did an awesome job getting down into the dirt and flinging it at me and the dog!  The one thing we did notice after – the straw we put down seemed to make the ground a bit “tougher” in an area, but I think it will help hold moisture once summer hits, as well as decompose later for good compost/nutrients.  Last year, Colton brought out his Farmall M and some sort of chisel/cultivator (silly farm girl doesn’t know the difference) and disked it up, but this made the soil more fine.  It also was more exact in where Colton put it up or down and an extra few inches on one side (since I keep adding plants …)

I’ve given a list of what we’re planting this year, but I’m wondering if things will be changing.  At one point I thought we had plenty of room, regardless of Colton’s protests that he wasn’t going to have a yard left.  Now … His required amount of potatoes and sweet corn take up almost half the garden!

I got three different kinds of potatoes from the store – Red Norland, Gold Rush, and Yukon Gold.  (I also see there are purple options and might have to track them down!).  After cutting up a few of the seed starts I ended up getting about 45 seed potato pieces in four rows.  Now – to the normal person, this may seem like WAY too many potatoes.  But when a Colton kid is involved … that’s a minuscule amount!  We planted 13 plants last year, and, granted, the harvest wasn’t the best, but they only lasted us about a month.  Seriously.

The Ambrosia Sweet Corn from MIgardener had forty seeds (two packets), but of course that wasn’t enough, especially when you have to account for mole invasions, so I planted three rows of sweet corn – more densely than the packet suggested to account for the moles, germination, bad luck, accidental stomping …

And POOF – there went half the garden.

We debated for quite a while on how to do the rest of the space, and finally we just decided to grab a packet of seeds and plant.  At one point I thought I would make a diagram (and, in fact, I did), but the diagram went out the window when the potato plants went from 20 to 45 and the corn from 40 to probably 80-100.

Colton then mounded up some dirt for the zucchinis (I hadn’t planted them this way before, but it will be interesting to see how they grow!), and I put four seeds per mound.  Technically I should probably have only done 2-3, then thin them out, but I doubt I’ll have the heart to kill them!  I’m not a plant killer if I can help it!  Plus – we have a lot of friends and family who like zucchini, and I already have someone interested in the blossoms.  So … we might have several plants going!  I don’t think we’ll have as many as last year – that jungle was a little too much – but we will have several, assuming they all germinate.

Next – beans.  Or so I thought.  My packets from MI gardener hardly covered a 3-foot section, and here I was planning at least two rows like last year (where we might have enough to last us the whole year; don’t worry – I ran to the store the next day and planted more, although still not as much as last year, so if we run out I might be a little sad!).  The second variety of beans I planted, Black Valentine (bush), I’m sort of planning to harvest for a while, then let the rest go to “seed”.  This would give us dry black beans that I could store for salsas, casseroles, or whatever else we’d use black beans in.  Ok – so I may need a few more ideas!

Peas went somewhere in there – don’t know how they’ll do, but I’m hoping we can get some sort of crop!  I winter sowed a few as well but have not seen any plant starts yet.

Then – broccoli!  I had winter sown several broccoli seeds.  Since this is a cooler weather plant, I thought I would give them a good start before putting out in the garden.  Some winter sowers open the jugs once in a while to get them more acclimated to air, but after watching an MIgardener video on him taking his plants direct from grow lights to the great outdoors, I figured I’d be pretty safe.  But scared. 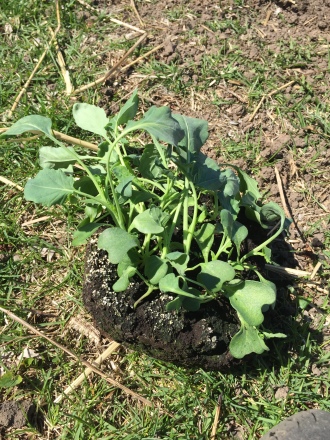 These broccoli starts are form my first year trying winter sowing and they turned out great! 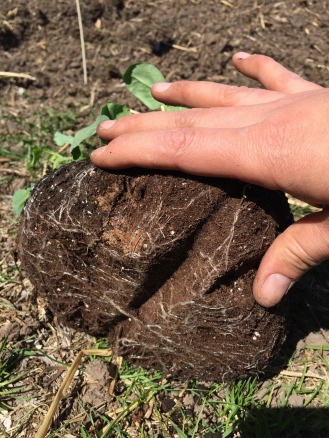 The roots were very fine but they went all the way through the soil to the bottom of the jug.

I have seen several ways to get starts out of the milk jugs, but this one had pulled away from the sides enough that I was able to pop it out with minimal damage.  It was pretty interesting to see the roots growing through all the way to the bottom – and gave me a good reason to make sure I transplanted these.  Next time I might water it down a bit, because once I started pulling the starts apart in blocks, and then each plant, I pulled a lot of roots off the plants.  I started getting pretty worried after dividing and transplanting, as they were looking pretty close to death, but watered them in and by the next day most had decided to perk back up!

After dividing out the broccoli seedlings, the starts started looking pretty sad! I was scared I was going to lose them all! 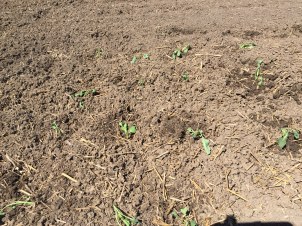 The poor things were roughed up pretty well, so I watered them in and hoped for the best.

By the next day after transplanting them, the winter sown broccoli starts were beginning to come back around – hopefully they’ll make it!

And just like the zucchini last year … I may have gotten a little carried away with the broccoli.  You’re supposed to plant them 12-24″ apart, but I’m not sure I even made 12″.  I figured my poor gardening skills would fix that.  My Garden Plan had us at 12-15 plants, but I wasn’t sure if we would be able to fit that many or if we’d really go through that much.  I think I reached that and then some!  The sad part is – I’m still not a plant killer!  So if every one of these plants make it … we might have the Broccoli Jungle of 2019!

While I was playing with broccoli, Colton agreed to feed into my plant fetish and plant my Indian corn.  I had saved seeds from last fall’s decorations.  He dug two rows – crosswise from the sweet corn.

While I have been a farmer’s daughter all my life, there are still many things I don’t know.  Such as – how does cross-pollination affect my corn/grass plants.  What I found was kind of intriguing – yes, Indian corn and sweet corn will cross pollinate.  But if you have a “buffer” plant between them, or even a bit of space with the Indian corn down wind, your sweet corn should be safe.  Sweet corn is different from Indian corn.  Indian corn is a “flint” corn – meaning, it’s a harder kernel which is used for popping and milling.  Sweet corn is eaten as-is, either on or off the cob.  You wouldn’t want to try eating Indian corn the same way.  If the sweet corn pollinated the Indian corn, it wouldn’t be the end of the world.  We might get different colors or slightly different textures.  But since we’re planting sweet corn for consumption, and Indian corn for fun, decorations, and a potential cash crop, we wanted to make sure the sweet corn was safe.  So we planted it to the west of the Indian corn.  Not all, but most wind is from the west, thereby carrying the Indian corn pollination away from the sweet corn.  This doesn’t really fix any bee activity, but it definitely reduces potential cross-pollination.  Another way to help with this is to choose different maturity lengths and/or plant at different times so they pollinate at different times.

We still have tomatoes, peppers, onions, garlic and carrots to plant, assuming my tomatoes and peppers make it through my winter sowing jugs.  I’m getting a little worried about those as well!  We have a bunch of lettuce growing in the jugs, and I’m trying to figure out the best way to transplant it – in the garden, where we’re running out of space, or in containers, where I’d need more soil as well as somewhere “safe” to put the containers.  We have been getting some serious wind lately and it risks knocking over the containers.  There’s also enough I might be able to sell a few plants to those interested in growing their own lettuce.

As much work as this sounds – the hard work is yet to come!  We still have some planting, a LOT of weeding, and then harvesting and preserving to do!

What are your garden plans?  Have you started planting yet?  Tell us below!

Interested in some of our produce – stay tuned and “Like” our Facebook page for daily updates!  Check out our Products page or Etsy Store for products we’re currently offering or ideas – contact us for something custom!