I’ll admit it – it took me 23 years to break down and learn to drive a tractor.  I had many excuses – was too big and dangerous, fear of the clutch, too many buttons, I was going to hit something, why don’t the breaks work better … But I became desperate one year and needed a job, and the family farm was hiring fall harvest help.

So I succumbed to tractor driving.  Yep – I went from a Chevy Trail Blazer to a giant tractor and wagon (don’t ask me what kind it was – all I know is that it was big and red!)

And now I can drive a tractor or anything else with a clutch!

Granted – a lot of this is due to having to drive my friend’s manual truck.  I’ve always been able to drive a trailer.  The levers and other “gizmos” just took some time to get used to.

Colton’s family has an old, restored, John Deere tractor that is “temperamental.”  Everybody in the family says so!  One day he was trying to crank the thing to start, and I walked in the building.  He commented something like “Might be hard to start but back in the day you’d be glad to have it over their horses.”

Now – to understand that comment you need to know one thing:  I have horses.  Two, in fact.  I’ve used the one for endurance riding, is twelve, has a scary/abused past, and is the sweetest thing on four hooves; the other is a rescue horse that’s come with his own idiosyncrasies, is currently 4 years old, a bit of a monster, and still not broke to saddle (which isn’t too big of a deal if you know my philosophy on early training, but that’s for another post).

And then the tractor started.

Needless to say – Colton is convinced the tractor hates me because I offended it and won’t start – or stay running – when I’m around.  Hence the reason I’d take my horses over the tractor any day!

Even though I’m a farmer’s daughter, I’m so clueless about tractors.  I could tell you that the peroneus tertius muscle is a part of a horse’s stay apparatus and a major muscle to contraction and extension of the hind leg as well as keeping the horse upright while sleeping, but start telling me things about tractors and I’ll give you the best deer-in-the-headlights look imaginable.

I also think they should work!  Colton thinks I offended that tractor, but if it doesn’t work, then yes – I prefer my horses!  I get that belts break, oil needs changed or added, tires leak air, but the thing should work properly.  And if it doesn’t – I know where to find a sledgehammer.  (Besides – notice how we still talk about how much “horse power” a tractor has!)

Ok – so I really just wanted an excuse to talk about my ponies today!  They are not “working” horses – neither can pull a plow.  One is terrified when he gets into narrow places, and previous attempts at trying to teach him to drive have proved disastrous; the other should learn just because he needs to learn valuable lessons, such as how to be a gentleman (he really can be a good boy, but sometimes he’s just a snot!). 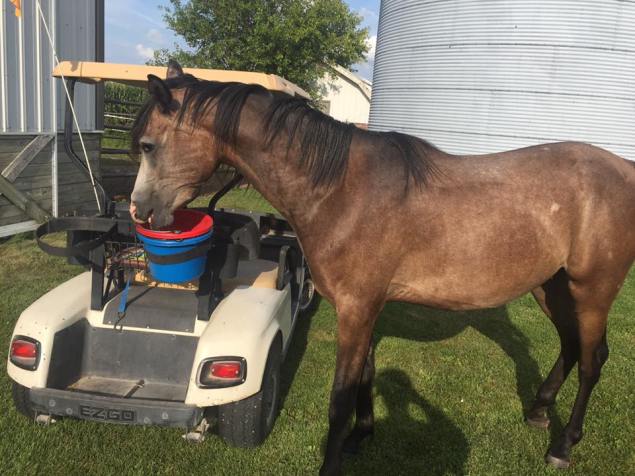 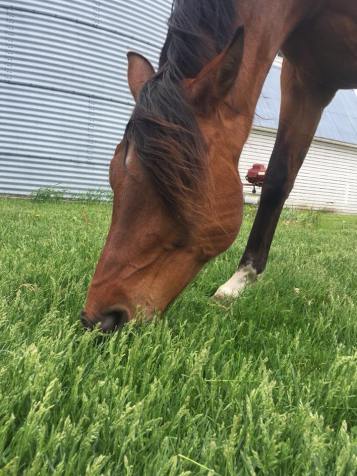 Sometimes, even during the times of frugality, savings, and cutting back on expenses, you need that “extra” in your life.  Something that grounds you, gives you an emotional and physical release.  A project just for you that can be used to get your mind off of the bills and work and everything that needs to get done.  It’s important to take care of yourself once in a while.

Horses may not till the land, take you to town, or be that “beast of burden” anymore.  They’re more of a hobby (though some are still a business, such as in the racing industry).  But just because their purpose has changed doesn’t mean they don’t serve a purpose – for me, they’re a friend, companion, and that place away from life that allows me to focus on something completely different for a while.

They come with their required work, too – hay baling, frozen water tanks, down fence, cuts, hoof abscesses … the list could go on.

But even Colton can admit that they’re pretty cute and cuddly!  Who knew they had such personalities!?

It’s crazy to think that there was a time when farmers and homesteaders relied on horses and oxen to till the land and get them from point A to point B.  In it’s time that old John Deere was a revolutionary thing (and not an obstinate piece of metal!).  Farms in that time couldn’t be huge – there wasn’t enough time to till, plant, care, and harvest in one season.  However, if the crop failed or there was a natural disaster – their lives were in jeopardy.

Today we have hundreds, sometimes thousands, of acres per family; we have crop insurance if there is hail damage or flooding; we have tractors and combines to work a hundred acres or more a day.

The USDA does a census every five years.  According to the 2017 results, “There are fewer farms. The USDA counted 2,042,200 farms in 2017, 3.2% fewer than 2012 and 7% fewer than 2007.  … Only 42% list farming as their primary occupation, and 61% of farmers have off-farm jobs.”  (East Oregonian).  Which is kind of ironic because we are an increasing world population.  And yet our farms, farming acreage, farming families and profit margins are in decline.

Several, inter-related issues must be considered when discussing the long-term viability of the nation’s family farms. An estimated 70 percent of U.S. farmland will change hands in the next 20 years, but many family operations do not have a next generation skilled in or willing to continue farming. If a farm or ranch family has not adequately planned for succession, it is likely to go out of business, be absorbed into ever-larger farming neighbors, or be converted to non-farm uses.

Farming has come a long way – from horse-drawn plows, to cantankerous tractors, to today’s giant equipment costing close to a million dollars.  These big operations come with big rewards, but they also come with big costs and risks.

It’s amazing to me how an integral part to not only our society, but also our health and future of a civilization, can suffer such extreme difficulties, statistically be on a decline, and yet subsist through thousands of years of history full of wars, famine, disease, recessions, and all sorts of maladies.

How about you – are you from a family farm?  What’s your farm story?  Got that “special thing” to get you through your work week like we have our horses and tractors?  Tell us in the comments!