Our Farm Dog, Melby, is quite the character, and different from most of her breed counterparts, but she not only has been an amazing addition to our family, she has also proved to be smarter than we all thought!

Melby is an Australian Shepherd.  Her full name is “Melbourne,” after the city in Australia, but we call her “Mel” or “Melby for short.  (Our first “Aussie” was Sydney, so we kept with the theme!).  As an Aussie, she has a very herding-focused brain.  It’s just natural.  They usually aren’t quite as wild or spastic as Border Collies, but other than that they share the same herding instinct.  They also tend to hunt for things – she’s constantly after the birds, gophers, and rabbits in the yard; she’ll catch mice and play with them (barely killing them, unfortunately, because she’s too soft-mouthed).

This is partly why we haven’t let her be in the chicken pen.  Mostly.

She’s weird – I’m not gonna lie.  When she plays with her toys she can be that usual doggy rough, shaking them, pouncing on them, she’ll rip a few apart, but her super weird thing is that if you squeak her toy – she stops playing, looks at it with great concern, and licks it like she’s trying to console it.  I kid you not.  And usually after these actions she’s done playing with it.

It’s about the same with any critter that starts to chirp/squeak – she was after a vole one day and the thing started chastising her so she just looked at it.  She’d stick her nose down in the hole then pop back in alarm when the vole squeaked and scolded again.

Needless to say – while she is a herding-breed dog with a slight prey attitude, she’s a wimp.

The first few weeks we had the chicks, we’d bring a chick out of the tank and she’d sniff it, maybe lick it (like consoling her toy), then turn away from it.  But if we started disrupting the chicks enough to cause them to fly about and chirp too much, Melby got worried about her chicks.  One time people weren’t watching her close enough and she jumped right in the tank with them.  (Ok – maybe more than once; I might have caught her mid air!). 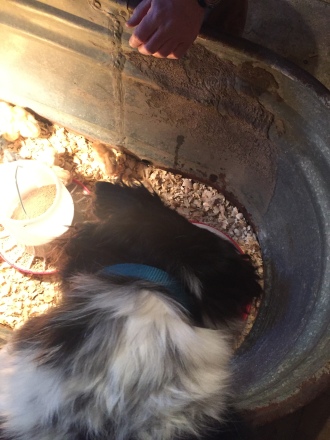 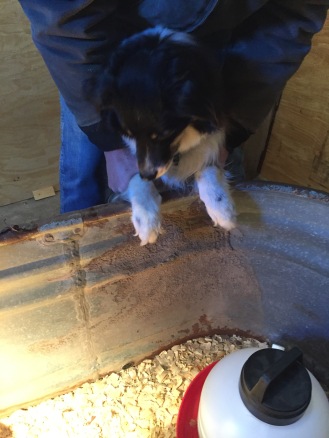 Melby wanted so badly to see the chicks, but when we brought them out to her she turned away! We showed them to her in the tank, and she did decide to jump in once or twice … But no harm done to the chicks! She just doesn’t like it when they start fluttering around and making noises!

Melby wanted so badly to see the chicks, but when we brought them out to her she turned away!

But for some reason, Dad decided to let her in the run with the chickens – and she was so good!

Dad said that he opened the door to the coop, and the chickens are scared to go out the door, so he called Melby in to the back of the coop and they both gently “pushed” them out the door!  At night he said she helped him keep them together (he found one escapee in another area of the run one night after closing the door) and get them into the coop.  She never rushed them, never tried to chase or pounce on them. 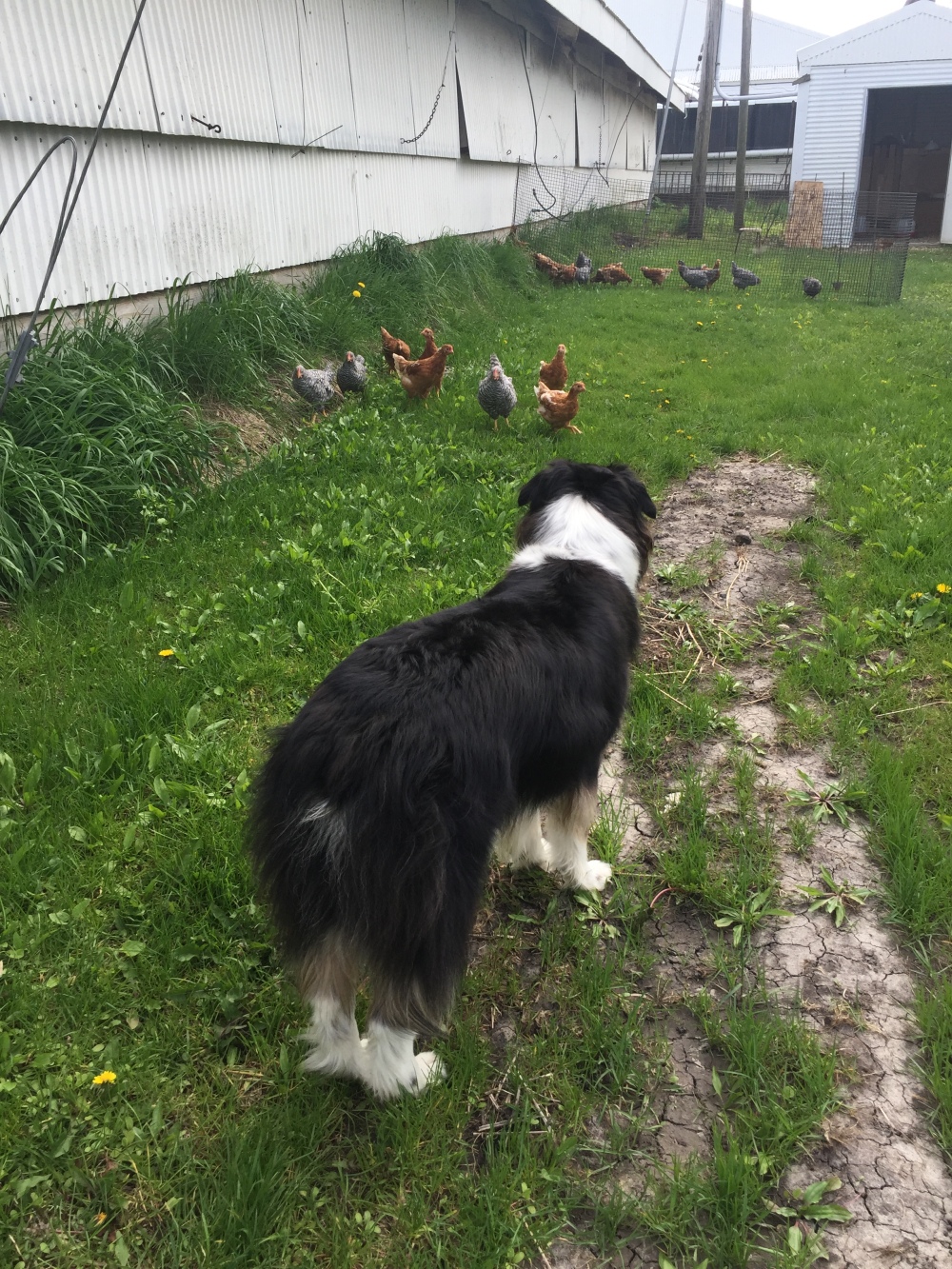 I had to do some work in the run with dad, and in came Melby (she’s pretty sure she’s allowed to go anywhere she pleases anyway).  She watched them for a while, and may have thought about herding them around, but after a few minutes she settled down and just laid down to watch them.  While installing the nesting boxes I picked up a couple birds to put in the boxes so they at least got the idea; they all floundered and squawked around, but once I got my bird I found that Melby was standing there watching the chaos, a bit of a twinkle in her eye, but still quietly watching, and – most importantly – not chasing the other chickens as they went wild.

How this may have been accomplished:

I‘m not gonna lie – we were very lucky that Melby acted this way!  It could have gone completely sideways with dog and chickens and dad flying all over the place trying to save the chickens and get the dog out.  Melby still needs more exposure to the chickens to make sure she stays this way, but this is a huge leap in the right direction.  Plus – we are so happy with how she’s handled them!  She is such a great dog!!

How about you?  Do you have a dog with your chickens?  Any dog-and-chicken experiences?  Tell us in the comments below!