I knew I wasn’t the best gardener, but I’d had some good luck with random things – sometimes too good of luck and would kick myself for planting so much.  But all these failures are sure frustrating!

Let’s start with the broccoli.  I winter sowed them.  They looked awesome.  Had probably 20 plants germinate.  Transplanted them.  Watered them.  Thought I was going to lose them and they perked right back up.  Then came the snow, rain, and ice.  I was going to give up hope – but no, Colton said let’s get them covered and we went out in the 30-degree rain and wind and covered broccoli.  Picked up the cover the next day and chunks of ice came off.  Then the plants started “disappearing”.  I thought they were somehow dying and the leaves were blowing off in the wind.  No such luck.  Enter:  Attack of the Bunnies.  ‘Nough said.

Lettuce – looks amazing.  Until you transplant it and then it doesn’t look like anything.  I finally cut the tops off two out of three jugs and transplanted what was left, hoping something happens, because once I transplanted the first jug I about had to harvest leaves individually.  And if you know me – I don’t possess that kind of saintly patience.

Zucchini – planted several in winter sown jugs and in the garden.  Was hoping to take a few plants to a vendor show, so I transplanted out of the one (of two) jugs and got about four plants (and a questionable plant that turned out to be a weed).  Of those four – one survived.  In the garden – planted probably 12 seeds and only one is sort of perking up out of the ground.  It may have been apart of the Bunny Attack as well.  If they don’t appear within maybe a week I might go ahead and plant more, hoping to get something out of the deal.

Winter Sown lettuce transplanted into boxes for eating or selling

This Winter Sown Black Beauty Zucchini is the only transplant to survive (so far!).

These Luffa Gourds are the only ones that sprouted from winter sowing. We’ll see if they make it!

Luffa gourd – I’ll admit it – this was kind of a shot in the dark.  I had such high hopes, though.  And then I saw something poking through the dirt!  And finally I legitimately had three luffa plants growing!  (Out of about 20).  And now that I’ve kept them “simmering” in their jug, one is looking a bit scary, so we may be down to two.  And since they’re close together, I might as well kill them all when I transplant them.  Why not!?

Asparagus – there were about 100 seeds in the packet and I planted them all.  I didn’t take a count on them, but I would assume about 30 have seeded.  They seem too delicate yet to transplant, but if my track record is any indication – if I don’t kill them in the jug, I’m sure I’ll succeed in transplanting.

These asparagus plants are starting to look pretty good – as long as they survive transplanting!

Winter sown herbs. From back to front – parsley, oregano, cilantro. So far they’re looking alright, as long as they survive weather and transplanting!

Herbs.  Marginal success if I can keep transplants alive.  I am really wanting the parsley to succeed because I have used an inordinate amount of it this last year.  The dill was looking lush and full, and then I think I let it stay in the jug too long and it may have started crowding itself out.  So I finally transplanted it in the garden – to survive the bunnies as well as the shock of transplanting.  Since I was getting so frustrated at this point I doused it with a goodly amount of Miracle Grow stuff.  A few days later it hasn’t died but it’s no Garden of Eden plant either.  Oregano – those seeds might as well have been dust, but at least something grew.  Don’t really know if it’s a weed or not, but it all looks the same, so I’m assuming it’s oregano.

Peppers and Tomatoes.  Don’t.  Even.  I mean – I realize I’m new to winter sowing, but seriously!?  Out of two jugs for each I managed to grow several weeds – of various kinds, I might add; one strawberry plant (where did that even come from?!), and maybe three pepper plants. Out of over 100 seeds.  And the pepper plants are still to be confirmed.  I thought a larger plant was a pepper plant and then it started turning funky colors and growing “hairs” on the stem – not a pepper plant. 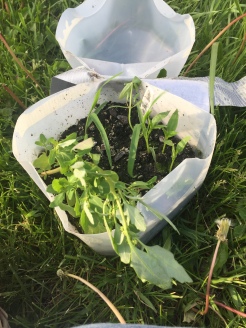 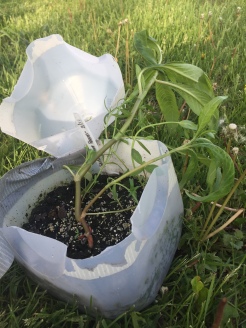 As for the rest of the garden –

The potatoes are popping out of the ground and some are even looking pretty good; however, there is only about 50% showing and we planted so much.  They’re easy enough they should have grown.  Even potatoes forgotten in the dirt over winter will grow, so it wasn’t because of the Return of the Polar Vortex.

Sweet Corn is completely MIA.  The moles arrived, but I don’t think they even accomplished total annihilation, especially since the Indian Corn survived most of their invasion.  Hopefully the ground is too cold and they will sprout once the temps get more stable.

Beans of both varieties have sprouted, and in fact the Black Valentine might be the winner of this adventure, but the Blue Lake beans from MIGardener looks as if it’s some sort of prehistoric mini trees with trunks of an unusual size.  Little Tom Thumb Peas are trying their best, and I may have planted a few too close, so – fingers crossed and prayers prayed – I might transplant a few of them so they have more space.  My one lone sugar snap pea I transplanted next to the Indian corn in a “Three Sisters” method, hoping to avoid staking them out.  It’s only been a few days, but it’s still alive.  The real question is will it produce anything – I had several plants last year and only a handful of pods.

These “bean trees” will either be Blue Lake or Black Valentine beans – hopefully we planted enough and the rabbits don’t eat them!

My one, lone sugar snap pea plant planted next to the Indian corn in homage to the “Three Sisters” method of gardening. Success TBD.

And the rebel award goes to the onions.  I transplanted several, and they’re “growing” at the rate of a slug’s desire to become escargot.  The plants that were “too small” to bother planting I just left on the ground in the same vacinity to die and – of course – they took root.  BUT – see above on the bunny invasion.  We must have unusual bunnies because I have a feeling they aren’t supposed to bother onions/chives, and yet my onions suspiciously are missing a couple tops …

Needless to say I pretty much feel like a gardening failure.  Yes, there is a lot to be learned, and we have had a terrible, cold, wet, late spring/winter, but it’s very disconcerting to have such high hopes and see everything just die a slow, painful, death.  Unless it was from the bunnies.  And then it was a very swift beheading.  The weeds, once tilled with the tractor, have started making a comeback and they’re no longer as easy to pull out, especially when it’s turning into a giant carpet.

If nothing else, at least I’m good at growing weeds.  Other than that – I have decided that I’m a terrible gardener!

How about you – have you hit your wit’s end with your garden?  How did you recover?  Growing weeds or plants this year?  Tell us in the comments!