I’ll admit it.  I JUST finished harvesting our potatoes.  On December 29.  I’ve come to the following conclusion:

The art of harvesting potatoes is hand-tilling the garden with your trusty shovel while hunting for those delicious tubers but only finding rocks.

That’s right.  Rocks.  Lots of them.  In a yard/garden of dirt.  Granted, there were some potatoes yet to be found (I did harvest about a row and a half several months ago), and miraculously they were still good enough to put together for supper, but the potatoes were just one thing on the list of neglect and roller coaster ride of the year we called 2019.  At least Farm Dog Raisin was around to “help”! 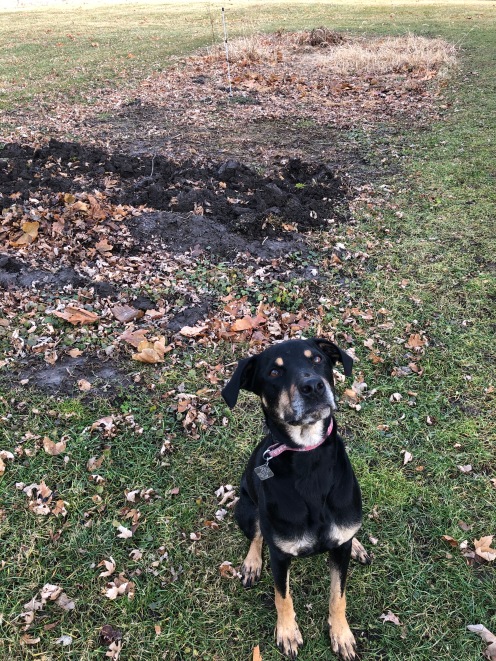 Farm Dog Raisin was my official supervisor while digging up potatoes!

All that digging and “all” those potatoes … Raisin didn’t much approve.

There were several fun things that happened in 2019, such as Dad’s chickens, getting married, and … well … something else I’m sure.  But we had such a crazy, oftentimes difficult, year that we were quite excited for the new year to get here.  I’m reminded of my own post about Resiliency and how important it was for us to go through the hard and bad times so we can appreciate the easy and good times so much more.

Many of the blogs I follow have already sent out their year wrap-up, but I’m kind of happy with the fact that this next post falls in New 2020.  We’re not looking back on a lot from 2019 for all the dark corners it brought (Colton taught me that in my ever-fretful mind of dwelling on the past), but instead look to the future.

Funny enough – I’ve already had a “seed swap” with a friend!  She’s been doing a garden for a couple years now and is probably far more advanced than I, but we had so much fun ogling over beautiful seed catalogs, hoarding some of our favorite seeds but exchanging others so we may both enjoy the fruits of our labors.  We might even have “weeding parties” to make that unbearable task more fun!  (So if you’re in the neighborhood and want to join us – come on over!)  There are still a few more things I would like to add to my garden this year, but hopefully I have most of my seeds ready.

I realized last year that I was not meant to grow tomatoes and peppers (again).  I was so hopeful doing the winter sowing thing, but, alas, my dedication (or lack thereof) never really paid off.  I may try again just because I have seeds from several varieties I wanted to try just for fun, and I couldn’t say no to MIgardener’s sales!

Other garden goals?  I have a strange love of beans – their colors, mostly – although we never ate beans much growing up, and I’m looking forward to growing a few varieties of those as well.  The last two years has been an utter failure for sweet corn and with Colton’s obsession for the veggie we need to figure out a solution – perhaps amend with fertilizer or a new location all together.  We grew Indian corn last summer with some success and, to be honest, I’ve acquired a fascination with the mass amounts of varieties and dream of having several different ones to grow and offer.  Who knew there were over 50 kinds of Indian corn!?  Corn for flower, meal, popping … along with the massive amount of heritage bean varieties, our ancestors and indigenous people really knew what they were doing!  But that is for another post …  (light bulb – thanks for the idea!).

A few weeks ago I splurged and purchased lumber to make a raised bed.  Still need to fill it with dirt (do I pay an exorbitant amount for “clean” dirt or shovel in from a stockpile riddled with weeds??).  I’m hoping to move at least the two perennial herbs there (if they survive the winter) and expand the herb garden.  I’m also hoping to add a bay tree … it’s still sketchy on if it would survive our zone 5 winters, but there’s hope!  I’m not a good house plant person, so it’s death may be inevitable. 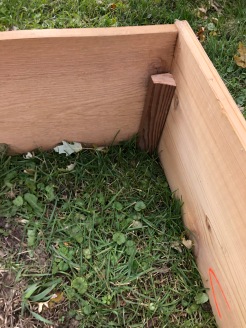 I had some wooden stakes I could cut down and drive in the corners to keep the raised bed secured.

We wanted to cover an old stump (that I had used to spray paint some things!). Cardboard weed barrier and fall leaves for compost and fill. 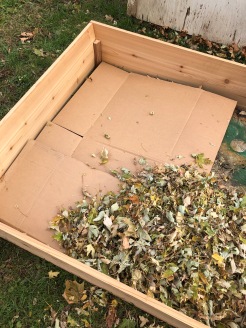 Note another stake in the corner. 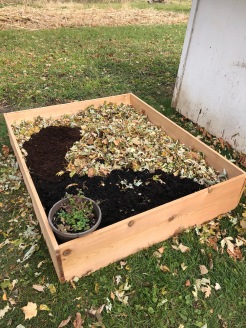 Still have a lot of filling to do! The leaves will smash down and decompose. I filled with what dirt I had on hand and moved in one lone oregano plant.

Of course, we keep plugging away on the barn.  It’s not finished by any means, but we’re happy to get little pieces accomplished and that the winds haven’t taken down our hard work.

We were able to get most of the posts and top rail built! had to tie it into the main frame and stake into the ground for stability. 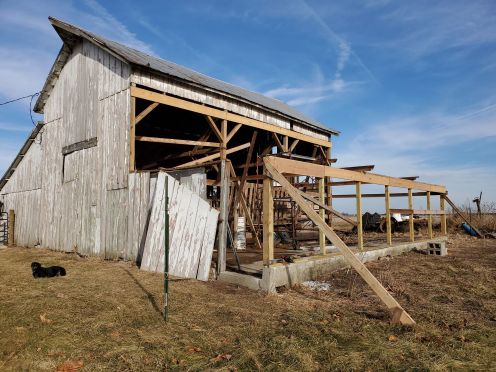 We still need to take down the west wall (it’s a good windbreak!), but Colton was very pleased with himself because he was able to get the final 6×6 post set and anchored!

Of course we still have chicken stories!  Dad didn’t have a heated waterer for the girls, so he put a heat lamp on it to keep it from freezing.  With 20 chickens remaining (we lost a few due to predators), we went from about 15-16 eggs per day to 18-20!  They just don’t understand winter!  Don’t forget – sign up for our newsletter (right now about once a month) and you can get a free download!

What about you?  Are you happy for the new year to turn over?  What are your goals for 2020?  Please tell us in the comments or send us an email!  Also consider signing up for our newsletter!