With becoming a vendor at our local farmer’s market, the question of if we are organic has come up.  Of course, my answer has to be a bit complicated.

Short version – “No – we are not organic, but we have not used any pesticides or herbicides.”

First – we are not certified organic, at all, and probably never will be.  It’s simply a process I am not knowledgeable enough to get into.  I certainly don’t know enough to even give valuable information as to the pros and cons!  Also, Colton works for a local ag company and helps with chemical applications for what I call “conventional agriculture”, meaning large farms, anhydrous, pesticide and herbicide applications.  It’s hard to work for a chemical ag company and be an organic farm!

A second note on why we are NOT organic – feed.  Organic feed seems to be about twice the amount (if not more) than regular feed in our area.  We would have to charge at least twice the amount for our eggs, which may price us out of our community wallets.  Instead, we have happy, healthy birds, let them out on grass every day, and give them the occasional treat and garden scraps.

Second – when I was asked this question, we didn’t have any pest pressure other than some bunnies eating lettuce and coons eating chickens and corn.  So I was safe and happy to say we had not used any pesticides or herbicides.

Of course – as soon as I said that, I came home to find squash bug eggs on the zucchini and squash, cabbage larvae on the broccoli, evidence of something eating tomatoes and sage, and the occasional little worm on the chamomile.

These are broccoli leaves – at least they WERE before the worms got them! 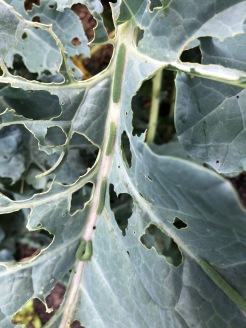 See those little green lines on the main stem and one on the lower right? Yep – those are cabbage worms. That’s how prolific they are. Imagine getting them out of a broccoli head!

Not sure what the black things are – eggs, tiny larva, or pest feces – but it’s evidence of pests and damage. ICK!! 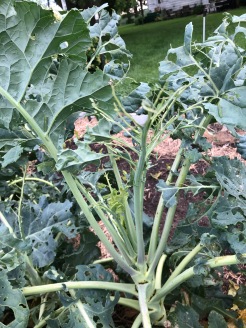 My biggest pest to Broccoli is cabbage worms, the larvae/caterpillar stage of those little white and yellow moths. They annihilate my broccoli!

Sure, I “tried” preventing this damage on the broccoli – I sprayed it with an organic spray (once) and totally purchased an insect cloth.  Which I had full intentions of using but never installed.  From what I’ve seen, if you put the cloth over your brassicas before the moths start coming out you’re basically denying the moths a place to lay their eggs; therefore, no larvae to hatch and COVER your brassicas.  Last year I tediously pulled all the little worms out of the broccoli heads.  This year, the plants were taking so long to grow, the heat was taking a toll, and the worms had done their damage so I decided to pull the plants.

I couldn’t get a picture of the squash bugs, but they pretty much cover the plants and fruit like the worms.  So far no damage is bad enough to pull the plants or make the fruit inedible (or even un-sell-able for market), but I have never had this problem before, so it is a concern for future years. (Some people have had luck with letting ducks loose in the garden – they don’t eat the plants but do go after the bugs.  So maybe ducks will be in our future!?  And, yes … I tried putting a couple chickens in there.  They said NOPE!)

And, of course, we have the inevitable tomato horn worm; however, the ones I found last year and the one I found this year had wasp eggs on them – still not good they’re in the crop but the wasp eggs slow them down eventually kill them!

Since we are not just feeding ourselves – we are offering our produce to others – I wanted to make sure we did our best to not use any pesticides or herbicides on the produce.  Some people, like us, don’t care if we use products like “Seven” or the like, but I didn’t want to have someone purchase something then ask if it was organic and have to refund them.  (In a full disclaimer, our sweet corn was “Round-Up Ready” and sprayed for weeds, but NONE of the ears were touched – we let the weeds grow!)

There are some growers out there that don’t even want to be labeled as “organic” – they prefer something like “all-natural”, “holistic,” or at least “no chemicals”.  Another phrase is “beyond organic,” although that never made sense to me.

How do you combat pests and weeds naturally/organically/without chemicals?

The insect cloth and ducks are definitely a start for pest control.  I do have some mint, peppermint, spearmint, and other herbs in the garden hoping to add a bit of a natural deterrent.  The gnats explode when we pick beans, so maybe that doesn’t work!?  Horn worms are immediately pulled and now gleefully fed to the chickens.

I think something that has helped for both pests and weeds is using so much straw.  It has been amazing for our weed control!  It is so much easier to pull weeds, keeps the soil moist, and I’m beginning to wonder if it’s helping to at least keep the mosquito population down since we don’t have a forest of weeds to wade through.

Weed control is harder.  There may not be any way to 100% prevent weeds.  There are weed cloths (some much better than others) that at least keep the weeds out of the pathways and around most of the plants, but you may still get some to crop up near the plants.  I don’t want to spend that kind of money yet, and we don’t have established beds, so the straw has proven to be a great alternative!

In both gardener problems – there are chemical ways to combat these things as well as organic options.  Just because something is “organic” doesn’t mean there aren’t sprays or some other application to help.  There are many sprays; diatamaceous earth also helps against beetles and other bugs.  Just be sure to read the labels so you know how much, how often, and how they’ll effect your good pollinators.

I’d like to think that if we have good bugs like those seen below we’re doing something right!

If you haven’t been watching our Facebook page, you’ve missed a few fun garden harvests!  The season is rolling right along!  The “Corn Kid” has been ecstatic with the corn harvest this year.  We have met our “freezer quota” (16 quart bags) for sweet corn and are over half way to our green bean freezer quota (6 gallon bags).  Do I blanch?  No – I don’t feel like taking the time!  I probably should (certain enzymes continue going after harvest if not blanched) but I have not yet had any problems.

The garden harvest is only beginning!  Be sure to follow our Facebook Page to see the fun photos and happenings, as well as when we’re at the Princeton Farmer’s Market!  Also be sure that you’re subscribed to our e-Newsletter!

Here are a few photos of our summer!  Send us a message or comment to tell us how your summer and garden are going!